Sleek, sophisticated and classy are three words I would use to describe the result of Ulanzi and Coman joining forces to create an outstanding travel tripod. The Zero Y carbon fibre travel tripod, at its price point is a force to be reckoned with. As you may be aware Ulanzi are being increasingly known for their innovation, creativity and range of camera accessories and Coman are the company behind reliable, creative, well designed and good looking tripods.

The Zero Y weighs only 1.1kg, yet its load bearing capacity is 3kg, allowing for any travel camera scenario you can throw at it. At its fully extended height it enables your camera to sit 1.556 meters (1,556mm) off the ground, and in contrast can house your camera at a minimum of 167mm off the ground, while enabling full functionality of the ball head. Folded up the entire unit only takes up a footprint of 423mm x 80mm (at the tripod’s widest part), made possible by the triangular central column, which hides away when compacted. 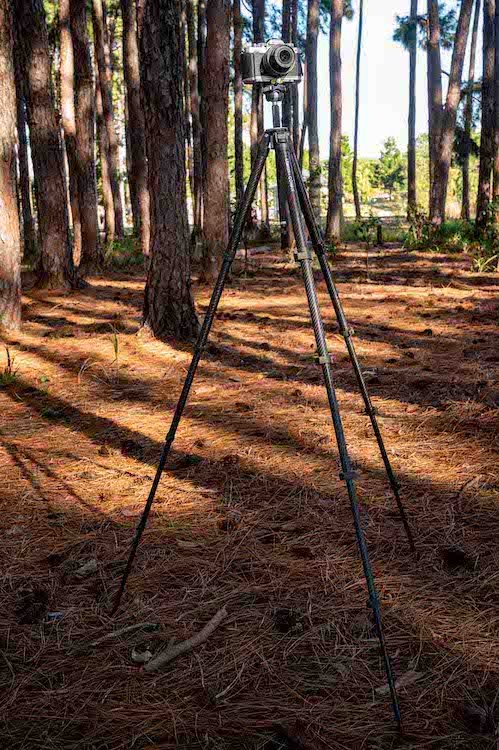 Each of the three 100% carbon fibre legs have five pieces:

When the centre column is not extended the tripod sits a total of 1,320mm high.

Each leg section is controlled by aluminium alloy lever clamp that can secure the legs at any desired extension length. At the base of each tripod leg is a sturdy rubber foot that has impressive grip on tiled and timber floors. These are connected by a ¼ 20” screw and easily interchangeable with metal spikes, also included with the Zero Y Tripod. 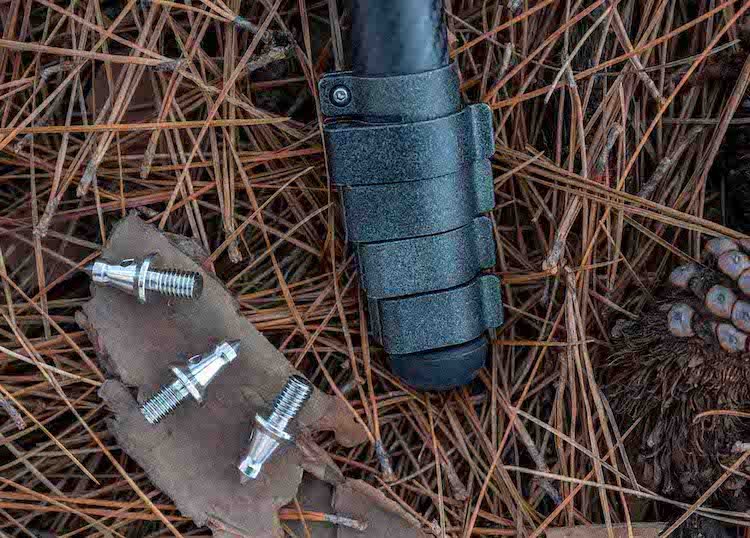 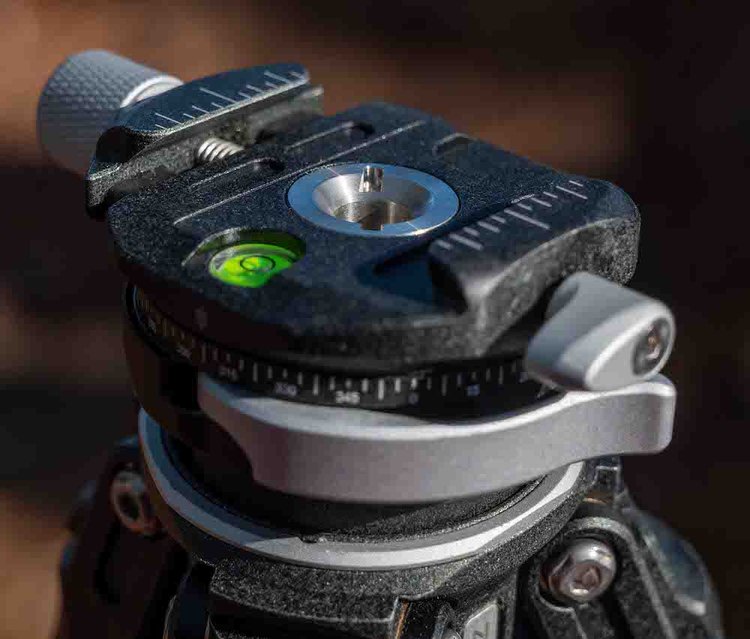 At the top of the legs is the business end of the Zero Y, made from aluminium alloy in a dark gun-metal grey finish, which perfectly complements the finish on the carbon fibre legs. The only section of the tripod made of plastic is the centre column mounting socket. At the top of each leg is a well-made extension button, enabling the legs to be extended and locked at three angles:

When the legs are fully extended the feet are positioned 920mm apart, less so if you choose not to extend the legs to their full limit. 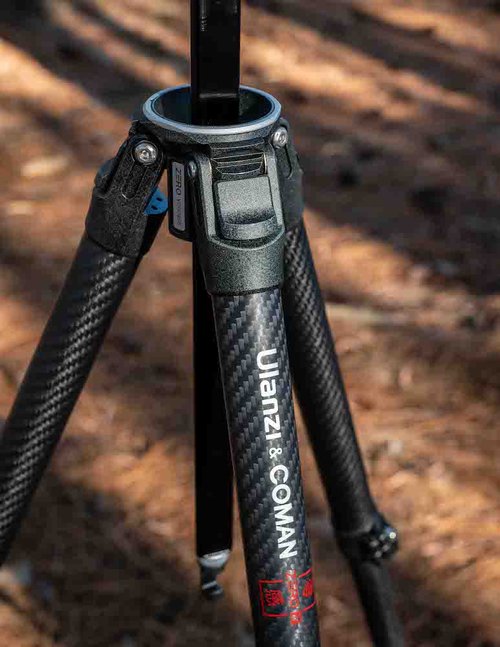 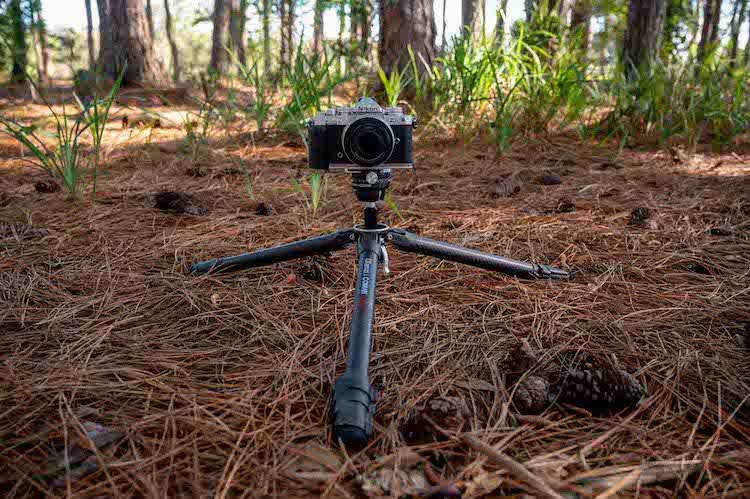 On the ball head mount (between two of the legs) is a female ¼ 20” mounting point for any accessory you may find helpful to your project (lights, microphones, gooseneck, carabiner, clips, etc). 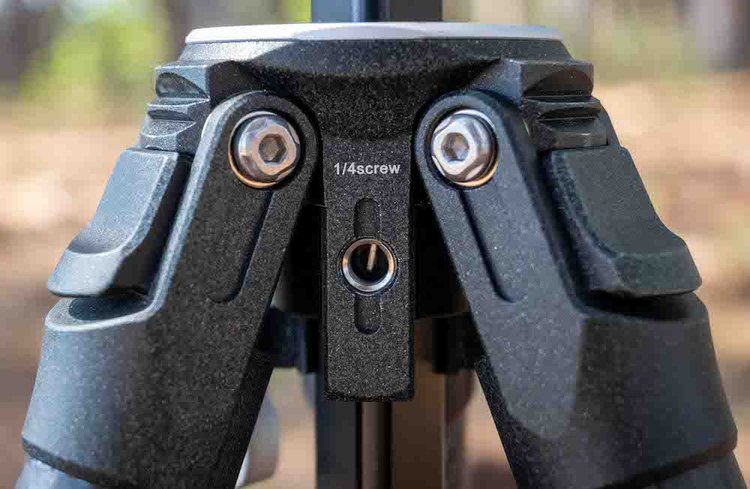 Between another two of the legs is the centre column braking system. It sits vertically flush with the legs and is inconspicuous. To use you simply extend the metal lever upward which frees the centre column to be increased or decreased to any heigh you choose, as well as the potential to remove it altogether. 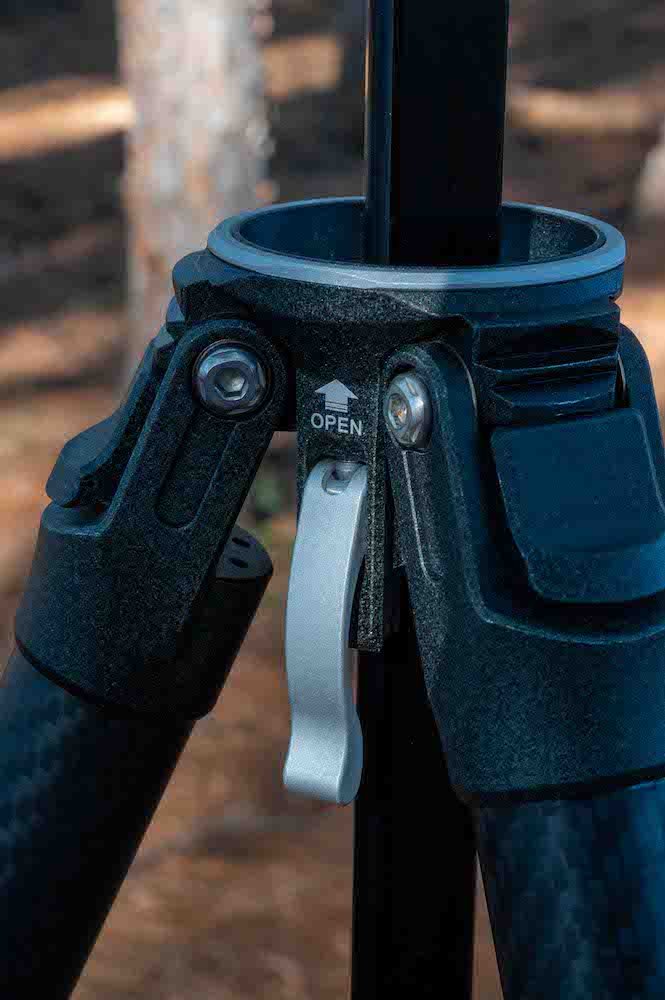 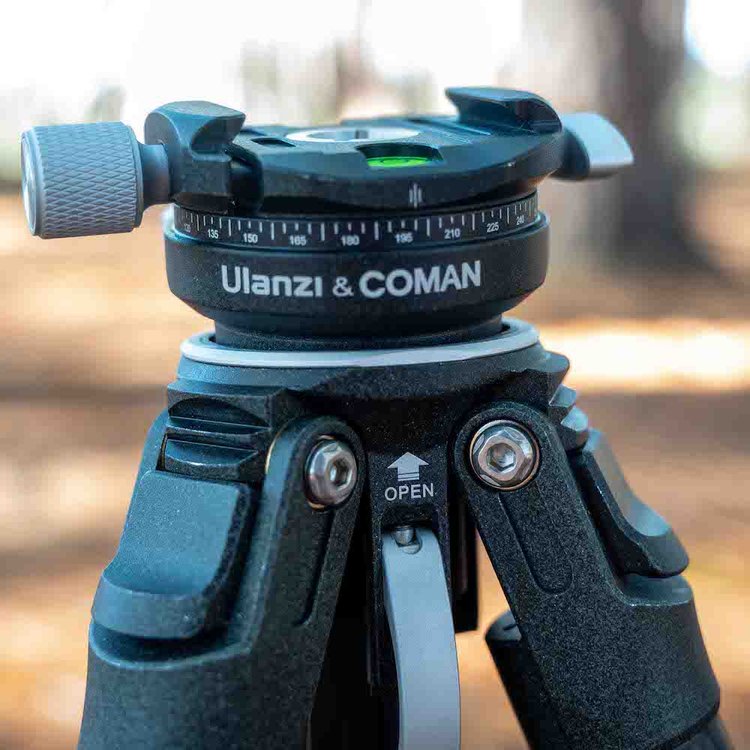 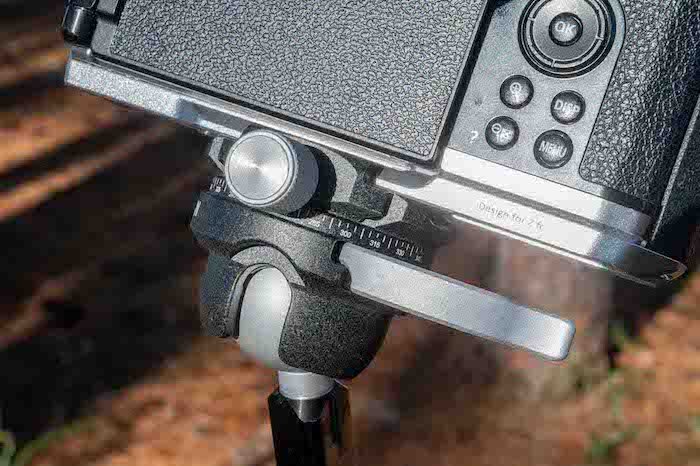 If you choose to lock it into the vertical position, you can then use the 360-degree panorama dial to adjust your camera to any desired angle for the shot you’re after. The panorama dial can then be locked off by using the small tightening lever on the side. This small lever can also be adjusted so as not to inhibit the movement of other functions, by being pulled out, turned, and then released. To help with your adjustments there is a 360-degree indicator ring around the panorama dial. The ball head is so well made that you can easily and effectively achieve any angle of shot you’re after, without having to move the tripod legs once they are extended. 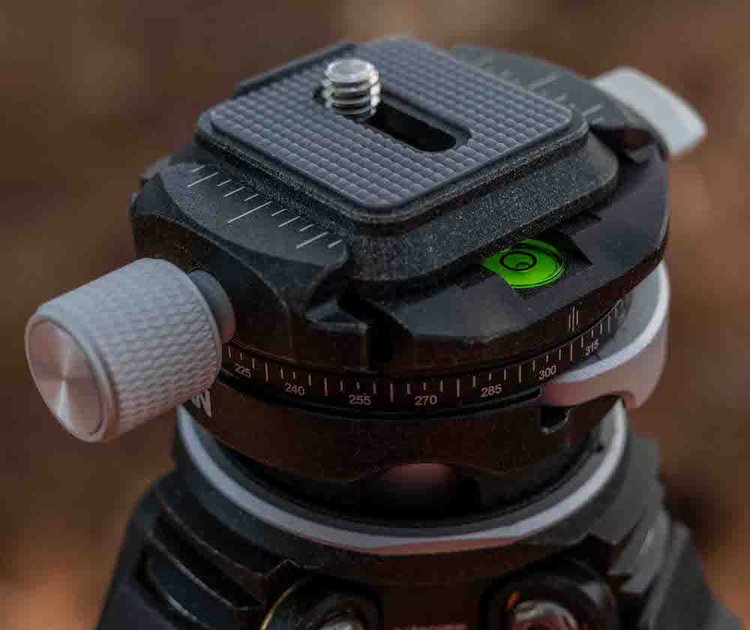 The ball head bracket is an arca-Swiss design, which can accommodate any version of the arca-Swiss plate, including L-brackets. Each Zero Y Travel Tripod comes with a. complimentary base plate. This simple arca-Swiss base plate is topped with a rubber grip, to ensure your camera can be securely fastened. Once it is released, by the unscrewing of the bevelled nob on the side, a security groove system is uncovered. This is to make sure your camera cannot fall out of the clamp, if it loosens. Also below the plate is a bubble level (which can mostly be seen once the plate is in place) and next to that is a 3/8” female mounting screw, should you need it. 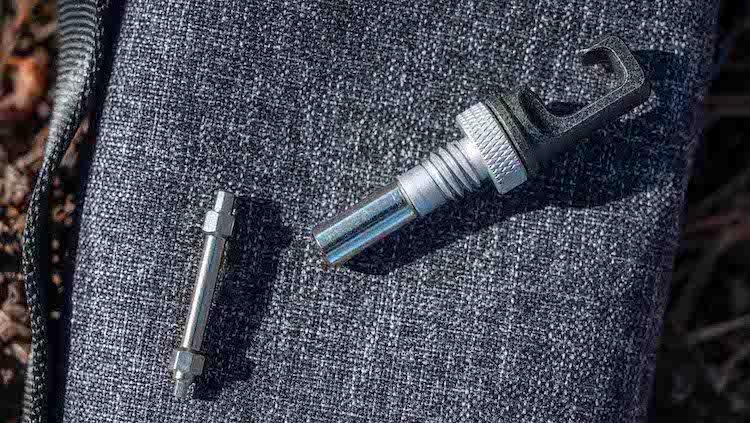 The hook tool, which is housed in the bottom of the centre column (screwed in to ensure it’s not lost), has three uses:

1. The hex bit is magnetised, held in the driver socket, offering the ability to use the tool to separate the centre column.

2. The other end of the magnetised hex bit is provided to tighten the external hex bolts situated all over the tripod. The hex bit can alternate between its two uses by simply being pulled out of the driver’s socket, turned around and reinserted.

3. The hook, on the other end of the driver, is to aid in stabilizing the tripod. If the mounting plate bracket is moved into a vertical position on the ball (head), you will discover a small hole. Into that hole you can insert the hex end of the hook tool, and will find it fits into a complimentary hex nut, that when turned repeatedly will cause the centre column to separate into two. The centre column is 265mm long, and once separated leaves a top portion 65mm. The shorter top end (attached still to the ball head) can be secured into the tripod socket, the legs can be positioned at 20o (near horizontal position), enabling the use of the camera much closer to the ground. 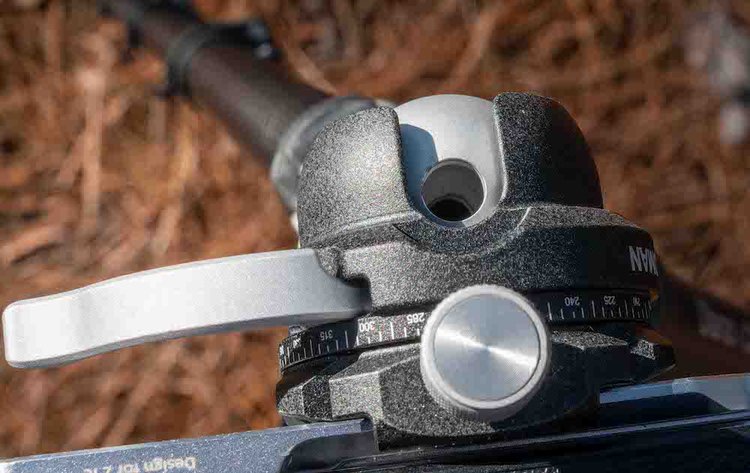 The hook end of the tool is also very clever, at home screwed into the bottom of the centre column. The hook is then positioned as an under-hanging hook, which can be used to steady the tripod in high winds, by attaching a weight (or your camera bag) to it. The hook can withstand up to 18kg, which is more than enough, considering the weight of a travel photographer’s bag. I would suggest however, you by a cheap rubber extension hook, so the tripod is secured to your bag, as your bag rests on the ground. If not, you will find the wind can blow your bag creating even larger instability problems for the tripod and your camera.

The centre column can also be used in underslung mode with the tripod, by inverting the fully assembled centre column and securing it upside down in the centre of the tripod. You can then mount your camera underneath it, which increases the creative options for landscape, travel, macro and product photography exponentially. 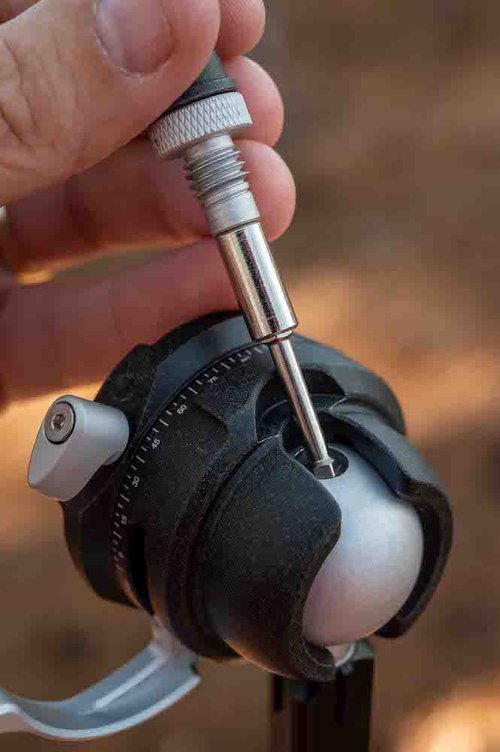 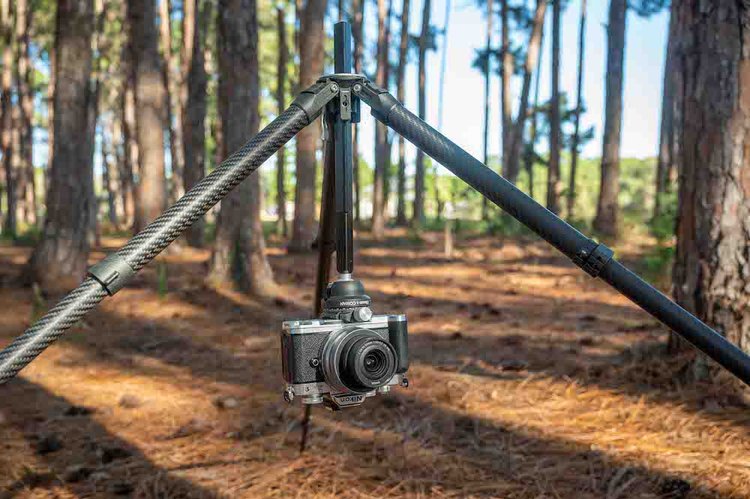 The entire Zero Y tripod, when shrunk down to its smallest size, fits beautifully into the snug canvas bag accompanying it. The bag has enough breathing space for you to add the spike feet and a few other small accessories which may be important.

It has two sturdy links at either end of the bag and a complimentary shoulder strap to easily carry it. If you’d prefer to attach it to your bag or carry it in your hand, the nylon carry handle, that spans the length of the bag is for you. The tripod is secured in the bag by a neat zipper, which opens up one end and a half of the bag, enabling you to easily access the tripod without too much wear and tear on the bag. 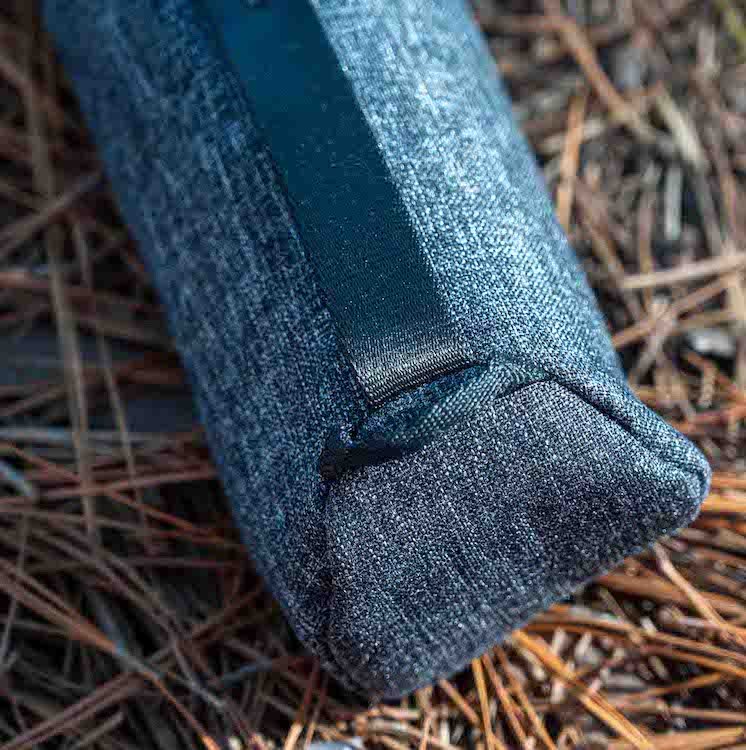 I have been more impressed with this photography accessory than any other I’ve ever seen. This includes the Peak Design Carbon Fibre travel tripod which I also own and will be comparing to the Zero Y shortly. At USD$369.95 this tripod is a wonderful addition to your gear. It is classed as a travel tripod because of its size and weight, but I imagine for a great many photographers it will be the only tripod you ever need and use. Therefore, given its highly competitive price, I’d encourage you toward it. To do so, just head here.

Thanks to Ralph Mayhew for the review article, here is the link to the original article.